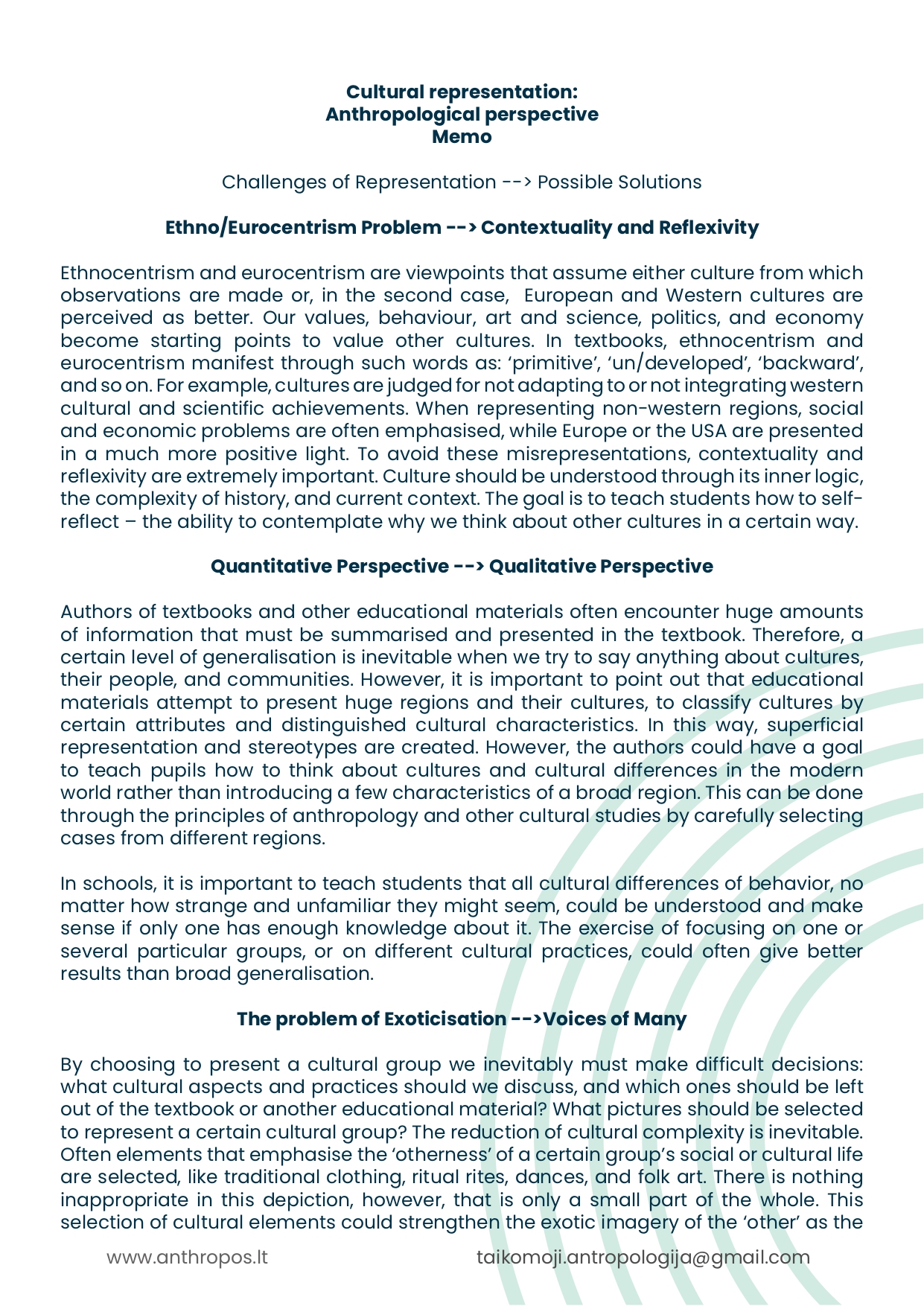 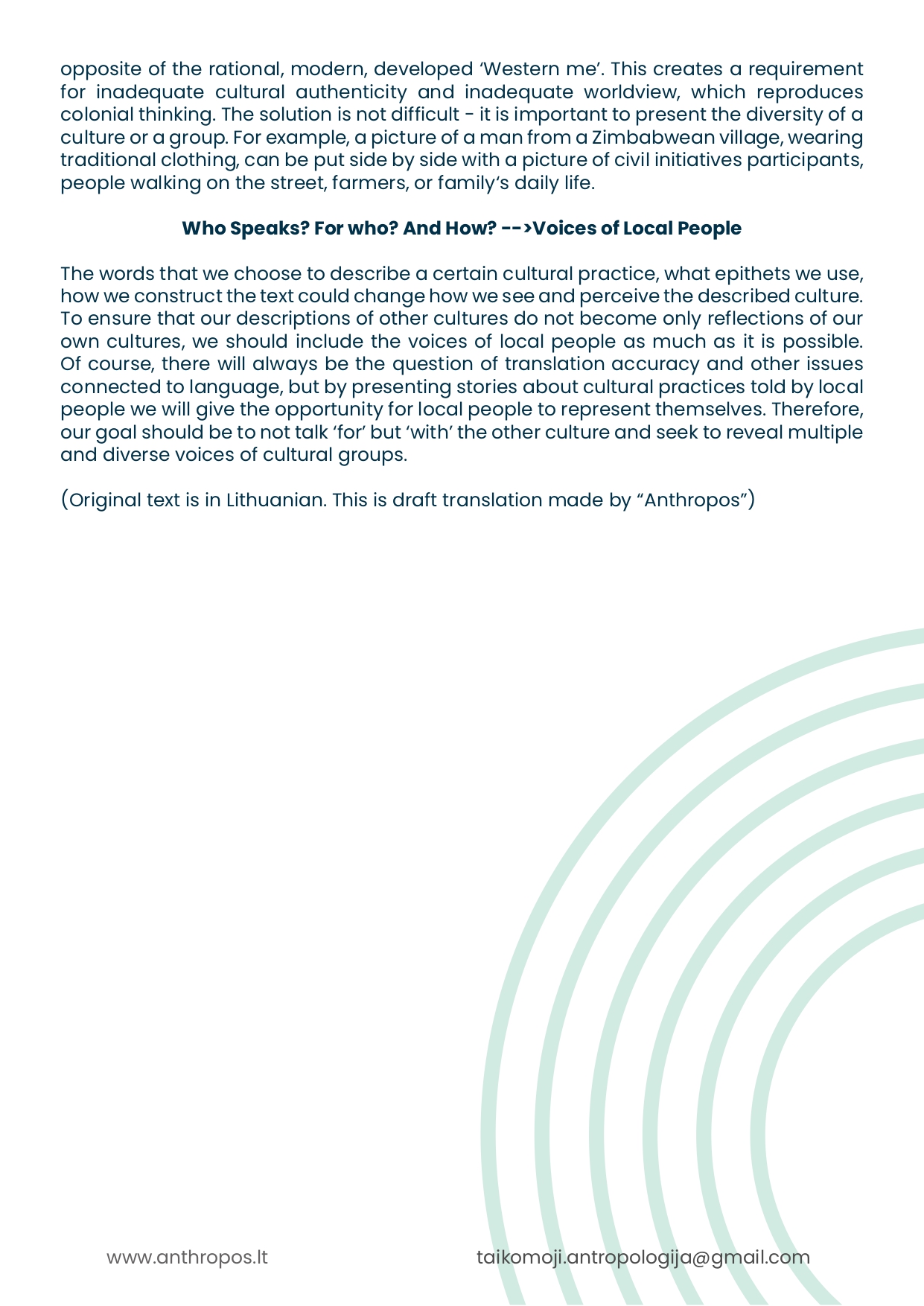 Ethnocentrism and eurocentrism are viewpoints that assume either culture from which observations are made or, in the second case, European and Western cultures are perceived as better. Our values, behaviour, art and science, politics, and economy become starting points to value other cultures. In textbooks, ethnocentrism and eurocentrism manifest through such words as: ‘primitive’, ‘un/developed’, ‘backward’, and so on. For example, cultures are judged for not adapting to or not integrating western cultural and scientific achievements. When representing non-western regions, social and economic problems are often emphasised, while Europe or the USA are presented in a much more positive light. To avoid these misrepresentations, contextuality and reflexivity are extremely important. Culture should be understood through its inner logic, the complexity of history, and current context. The goal is to teach students how to selfreflect – the ability to contemplate why we think about other cultures in a certain way.

Authors of textbooks and other educational materials often encounter huge amounts of information that must be summarised and presented in the textbook. Therefore, a certain level of generalisation is inevitable when we try to say anything about cultures, their people, and communities. However, it is important to point out that educational materials attempt to present huge regions and their cultures, to classify cultures by certain attributes and distinguished cultural characteristics. In this way, superficial representation and stereotypes are created. However, the authors could have a goal to teach pupils how to think about cultures and cultural differences in the modern world rather than introducing a few characteristics of a broad region. This can be done through the principles of anthropology and other cultural studies by carefully selecting cases from different regions.

In schools, it is important to teach students that all cultural differences of behavior, no matter how strange and unfamiliar they might seem, could be understood and make sense if only one has enough knowledge about it. The exercise of focusing on one or several particular groups, or on different cultural practices, could often give better results than broad generalisation.

The problem of Exoticisation -> Voices of Many

By choosing to present a cultural group we inevitably must make difficult decisions: what cultural aspects and practices should we discuss, and which ones should be left out of the textbook or another educational material? What pictures should be selected to represent a certain cultural group? The reduction of cultural complexity is inevitable. Often elements that emphasise the ‘otherness’ of a certain group’s social or cultural life are selected, like traditional clothing, ritual rites, dances, and folk art. There is nothing inappropriate in this depiction, however, that is only a small part of the whole. This selection of cultural elements could strengthen the exotic imagery of the ‘other’ as the opposite of the rational, modern, developed ‘Western me’. This creates a requirement for inadequate cultural authenticity and inadequate worldview, which reproduces colonial thinking. The solution is not difficult - it is important to present the diversity of a culture or a group. For example, a picture of a man from a Zimbabwean village, wearing traditional clothing, can be put side by side with a picture of civil initiatives participants, people walking on the street, farmers, or family‘s daily life.

Who Speaks? For who? And How? -> Voices of Local People

The words that we choose to describe a certain cultural practice, what epithets we use, how we construct the text could change how we see and perceive the described culture. To ensure that our descriptions of other cultures do not become only reflections of our own cultures, we should include the voices of local people as much as it is possible. Of course, there will always be the question of translation accuracy and other issues connected to language, but by presenting stories about cultural practices told by local people we will give the opportunity for local people to represent themselves. Therefore, our goal should be to not talk ‘for’ but ‘with’ the other culture and seek to reveal multiple and diverse voices of cultural groups.

(Original text is in Lithuanian. This is draft translation made by “Anthropos”)